Welcome to the Invictus Family! Visit the Invictus Website to meet the Principal and have a virtual tour of the Academy for parents of Year 6 and Year 12 joining our secondary school in Sept 2021. Click to visit. https://t.co/TXT1bCcyeO

Welcome to the Invictus Family! Visit the Invictus Website to meet the Principal and have a virtual tour of the Academy for parents of Year 6 and Year 12 joining our secondary school in Sept 2021. Click to visit. https://t.co/TXT1bCcyeO https://t.co/YL5zMW82l4

By Tamjid, with support from other Invictus Scroll journalists.

Many readers may have heard that a brand-new shopping centre is set to appear in the heart of our community. Invictus Scroll journalists wanted to know more, so this term we invited in Hannah Durling, Head of Community (pictured centre) for the new development, to find out more. 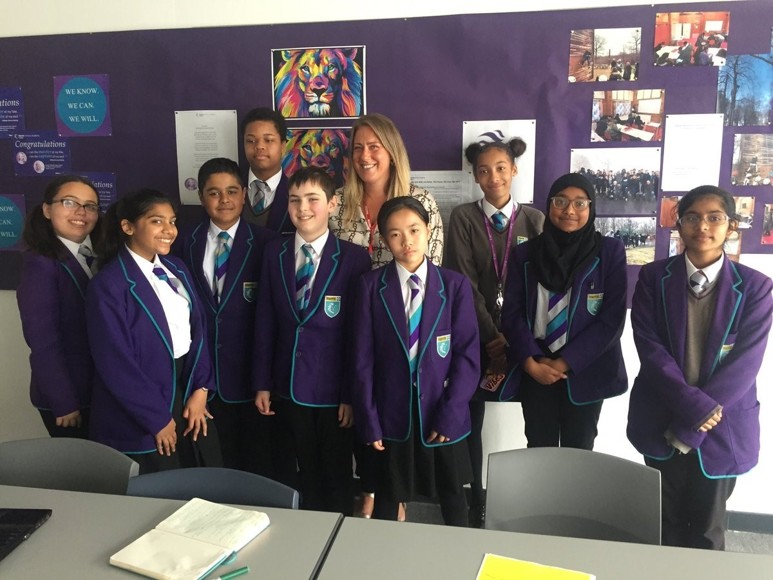 The new shopping centre (commonly known as Westfield, although technically we can’t call it that yet!*) will replace our beloved Whitgift Centre and run from the Marks & Spencers to the Whitgift Alms Houses. We learnt that this incredible new development will bring in a whopping 7,000 jobs, 200 new shops and £1.4bn investment into our community.

Although it has not been confirmed yet, developers are apparently pushing for there to be a new Apple Store in the middle of the development. This is something that there is likely to be a lot of excitement about!

"Croydon pound in the Croydon purse"

“There are many advantages to the new development”, says Ms Durling. “South London will get a range of new shops and entertainment…. I am a local resident myself and I am looking forward to shopping in Croydon more, which will keep the Croydon pound in the Croydon purse.”

Ms Durling says that a target of 25% of the new jobs in construction, retail, cleaning and management will be reserved for local people.

The development is also expected to contain a number of “anchor stores” which are the main attractions to the centre. This will include a new Marks and Spencers, John Lewis and Waitrose. The other shops are yet to be confirmed, but Ms Durling said they should be shops like All Saints and Ted Baker. These shops are glamorous but there are some worries that they could be more expensive and less affordable than the ones we already have.

“Croydon has already undergone rapid change and the transformation is set to continue,” says Ms Durling, who believes that the development will bring in “wider regeneration benefits to the area.”

Our student journalists raised other concerns with the development too. Some were worried about the loss of the Whitgift Centre that has been a big part of the community for many families. Ms Durling reassured students that Whitgift shops could be relocated in Centrale (opposite the main development) whilst building works are carried out, although some may well disappear.

“Of course there will be some disruption” says Ms Durling, “especially during demolition and construction, but our job is to minimise this and ensure Croydon continues to keep trading throughout this time.”

One other concern raised by students was whether the shops would be diverse enough to cater for our wonderful multi-cultural area. Ms Durling said: “We do have Arabic restaurants in other Westfield sites and we employ people who speak other languages…. We encourage small shopholders to try out a stall in our main centre rather than going for a full shop straight away. This allows them to test the market without taking too much risk.”

Ms Durling also said they also try to engage the community in other ways, for example through their Pop-Up Business school project. This has run for the past three years, which includes a two-week training course on how to start a new business from scratch.

The redevelopment should provide housing as well as shops. As part of the new development there are expected to be up to 1,000 residential units being built along Wellesley Road. However, house prices may well go up as more people want to move to our area with a sparkling new shopping centre.

On top of this, the redevelopment should also provide a corridor from Wellesley Road to North End that allows people to walk through 24 hours a day. At the moment you can walk through Whitgift, but it can close and feel unsafe at night. This Galleria should really help connect our communities.

There have been rumours that the new shopping centre may not go ahead especially with all the uncertainty surrounding Brexit. Ms Durling says that the Croydon Partnership is “committed to Croydon” and is currently reviewing the plans to make sure they suit “changing consumer and retail needs”.

Finally, this development is part of a whole bigger picture of investment in Croydon. According to Ms Durling, the government has classified the CR0 postcode a Growth Zone and they are investing £5.25bn in transport and construction in the wider area.

By Tamjid, with support from other Invictus Scroll journalists

*The Centrale and Whitgift Shopping centres are owned by the Croydon Partnership which is the joint venture between Unibail-Rodamco-Westfield and Hammerson.