By Paulina in Year 8 and Priya and Grace, Year 7.

Our first ever International Evening was held this summer to celebrate the different cultures in our Academy and our community. The evening was filled with music, entertainment, food and activities. Organised by Ms Dixon and supported by dozens of staff and community leaders, it was one of the highlights of our year.

The evening began with a warm welcome from another school called Elmgreen performing on steel pans, which is a type of metal drum from Trinidad and Tobago. The performance gave them a great opportunity to perform in front of a new audience. 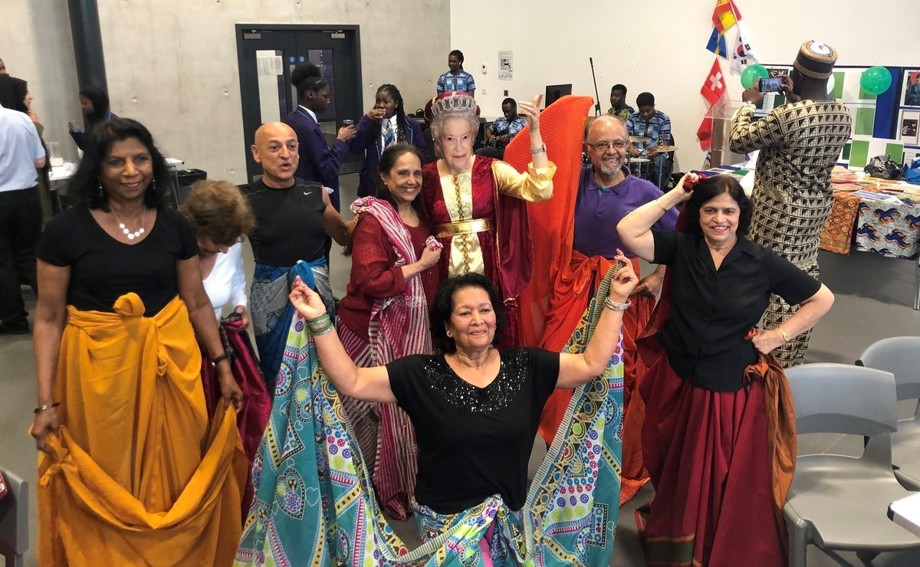 The hall itself was surrounded with different stalls covered with lovely delicacies from different countries. One of the popular stalls was the French stall where they were offering delicious French cakes which were baked by Ms Fossey’s Year 9 French class. The cakes were so good that they were half gone before the evening came close to closing! Not to mention the challenging quiz given by one of the parents and a Year 7 student which was based on people’s knowledge of France.

Walking around the room, people not only presented food from their countries, but students and teachers also wore clothes from their culture to present their nationality. But you won’t believe who also paid us a visit! The room was amazed to see Her Royal Majesty Queen Elizabeth who was seen talking to Mrs Bergin (though the students soon realised it was Ms Davis in disguise…) which we personally thought was quite creative considering she was born and raised in England.

Apart from the wonderful performance from Elmgreen, one of the highlights of the evening was an amazing performance from a group of Bollywood dancers. This performance created excitement across the room and encouraged people to get in the mood. From their colourful fabric to their passionate routine, this was a culturally exciting experience. 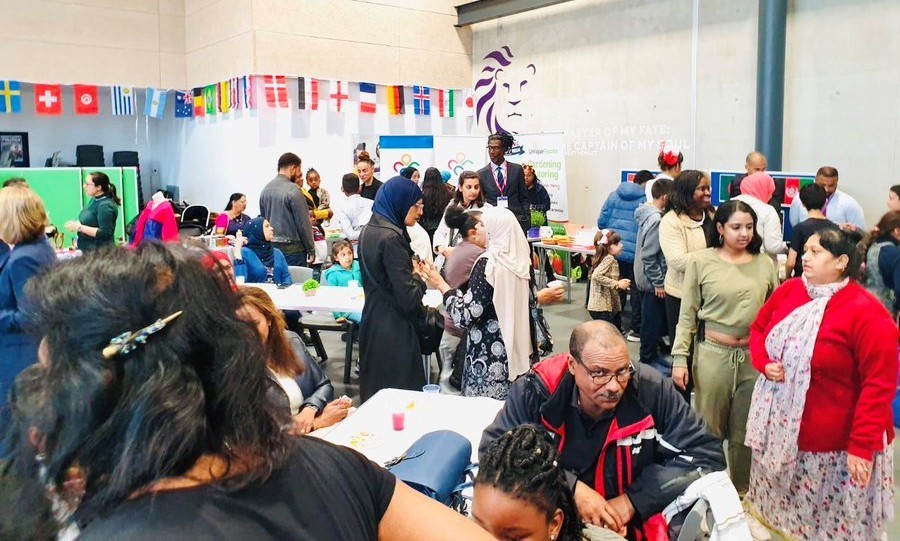 But that was just inside. Outside, we had a performance from Mrs Griffith’s choir. They not only sang but they also performed the Djembe and the Ukulele. It was entertaining to watch whilst we were having our very own BBQ by Chef Mr Degazon and Mr Green. So once the choir took a break, we all rushed to take a bite as it all looked very appealing.

We also had Mr Ajala, our IT teacher, come and play with his band and some of his friends which was interesting to watch as we have never seen his musical side. Ms Praena, one of our Spanish teachers, performed a special dance from her homeland called the ‘’Flamenco’’ which is a bit like salsa. Seeing this performance, we could also see her musical side. She danced passionately and once she started, it gave students and teachers the opportunity to take out their phones and take videos.

As the evening went on, students were given the opportunity to go on to computers and choose our own music (if it was appropriate!). We heard a lot of music from African cultures and Spanish songs. This was fun as it made us engage in the songs and start dancing which really brought us together and was the perfect way to end the evening. 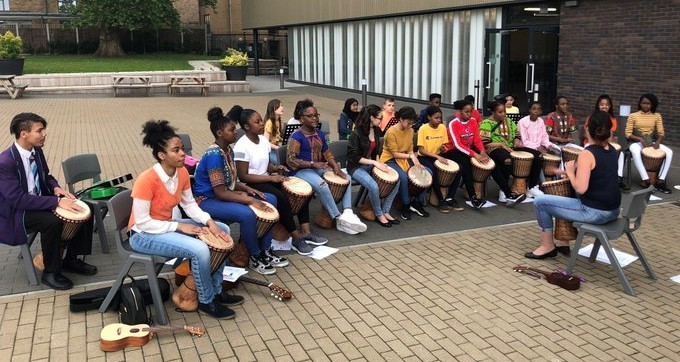 Just before we were told to make our way out, students went around the hall one last time to finish off what was left and take home any leftovers. We thought it was an amazing evening and it gave us an opportunity to taste different types of food. We liked the foods from Ms McQuade’s Irish table where she was offering delicious marshmallow biscuits and bread with a vegetable smoothie. We also liked the Spanish table as it tortilla which is made of egg and potato.

Everyone who had a stall made quite the effort to make this evening enjoyable and memorable. So well done to all the teachers and students who attended whether they were helping or not. This year it was really good and hopefully we do this next year, so we can try our best to make it better, if that is possible!

Here are some interviews with teachers and students who were there:

What is your culture? My parents are Nigerian but because I was raised in Britain, I feel British. But because some of my best friends are Caribbean, I feel like my culture is international. Some of my closest friends were from Pakistan some in south America my daughter is half south-American.

Are you enjoying the event? Yes, I love the steel pans and Mr Ajala’s band. The food has been amazing and the people around the community have been amazing.

What is your favourite stall?  It's hard to pick one, but Jamaica is epic, but obviously Nigeria because I made that stall. It's a close runner between Jamaica and Nigeria.

What is your culture? I have many cultures as lots of my ancestors were from different places. Some of my cultures include Ghanaian, Venezuelan and Polish. I have many other cultures too, but these play a big role in my life.

Are you enjoying the event?  Yes, I really enjoy it because of all the different variety of stalls that are here representing different countries – they are all very colourful and bright!

What is your favourite stall? The BBQ from Mr Green’s stall and the music from the stall that Ms Griffith organised. I also like the Ghanaian stall.  I have also learnt a few facts along the way!

What do you like most about your culture? I like Latin music because you get to do the salsa. I also like the food from Africa, especially the chicken.