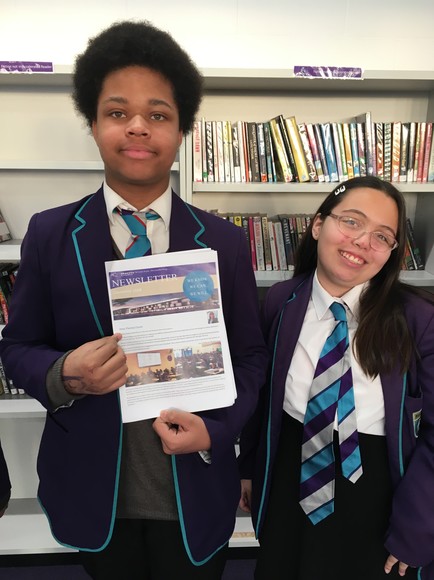 Chance and Paulina (pictured), Year 9, interviewed Principal Claudette Bergin about our new sixth form. Here's their article, which was originally published in our newsletter, Invictus Scroll.

A new chapter of history is about to be written in the story of Harris Invictus. In 2019, our Academy will open its doors to its very first 6th form students. Hundreds more students will be joining us, some homegrown from our own Academy and others from outside will come for the best qualifications in life, our new state of the art facilities and our passionate teachers.

The Invictus Scroll went to interview the Principal Ms Bergin to find out more about the 6th form and wider Academy news. Sitting in her office on London Road, she told us: “The next five years at Harris Invictus are going to be wonderful. My vision is to see 6th form on its feet here. I want students to be able to do the A-levels and BTECs they need to succeed in life. My biggest dream is for HIAC students to get their qualifications here and go on to university.”

Ms Bergin, who has been Principal for nearly two years at Harris Invictus, has to look after our current intake of 855 students and this will increase massively when the 6th form opens. She is clearly very proud of her job and the Academy in the community. “I said this to my husband the other night and I’m going to share it with you: Harris Invictus is the best thing about Croydon," she said. "I really mean that. I want the community to respect and love us. I want us to be the best Academy in Croydon.”

Ms Bergin also told us that there would be more exciting new changes coming to our Academy. For example, she wants to introduce new languages such as Mandarin and Portuguese to the school. Although these changes might take a while to come into place, Ms Bergin is clearly very passionate about them: “I would really love to offer Mandarin and maybe Portuguese. Mandarin is my favourite though - I would love to learn it and offer it here. I also really want to raise awareness about community languages. Many people here speak so many languages at home and we could really excel by offering qualifications in that here. I learnt the other day that somebody in the Academy knows Czech – I knew them for two years and I only just found out!”

But there are even more opportunities coming for Harris students who are interested in languages. Ms Bergin told us that in the future she is looking into setting up an exchange programme for students. This means that students who speak other languages can go and live abroad for a week to learn in the country whose language they are studying – and we will probably start with France. In return, we would take students here who want to learn English. “It’s early days”, says Ms Bergin, “but this is a really good way to learn a language and get the qualifications that students need. Whatever happens with Brexit we all need to be prepared and able to build relationships with other countries.”

There are other new great chances and opportunities coming for HIAC students who are interested in other subjects too. Lots of students have expressed a passion and interest for studying food technology and our building has specially-built labs for that purpose. At the moment there is a popular after school club that quickly gets filled up by students who want to do baking, but soon they may be able to take Food Technology as a formal qualification too.

“I am thinking about developing the Food Technology opportunities here in 2019. We started small with an enrichment club to try and decipher if there was a real excitement about the subject and in the future we really want to extend that. I’m going to do my best to make that happen.”

The last subject we asked Ms Bergin about was the controversial one: lockers. Lots of HIAC students want lockers to stop the daily struggle of walking up stairs with heavy GCSE texts. However, Ms Bergin was very clear and strong in her opposition to introducing lockers: “There are going to be no lockers. A lot of new builds don’t have them. They take up too much space and personally I think they can create behaviour issues. They create hot spots where you can’t quite see everything – dark spots where you can get poor behaviour.”

Our Academy clearly wouldn’t be the same without Ms Bergin. It’s clear she has got lots of plans for improving and changing the school (even if we are not getting lockers!). She told us personally that she used to have a career in advertising and she is really keen on art, so if she wasn’t our Principal she might pursue a career in illustration or fashion. But with her obvious passion for education, we are glad she is leading Harris Invictus. As she said, “I left industry to work with young people. I can’t imagine doing anything else really. You have these golden moments like when a child gives me a golden ticket and it just lights up their day. It reminds me why I do this.”